As you know from my November 2 post Dr. Çig quickly cleared in court, Dr. Çig left the courtroom in triumph: 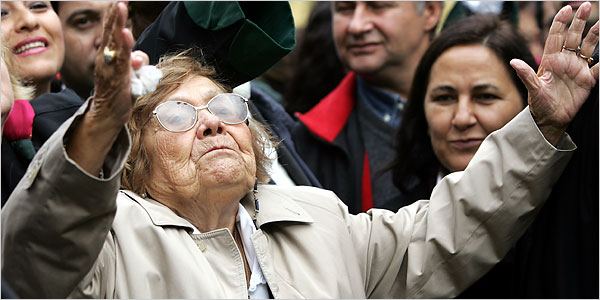 This photo accompanies the NY Times article by Sebnem Arsu. We actually learn a new and important fact here: "As such, her satirical letter argued, the wearing of a head scarf should not indicate a woman’s morality or religious devotion in today’s world. This comparison and other satires appeared in her book 'My Reactions as a Citizen' ..." So it seems these letters were satirical in intent! "My Reactions to Citizenship," the stilted translation of the original title I used previously (October 22 post Muazzez Çığ) stands hereby corrected also. Arsu: "More than 50 people chanted slogans supporting Ms. Cig and applauded as she left the courthouse ..." USA Today added: "Cig rejected the charge in court saying: 'I am a woman of science. ... I never insulted anyone,' private NTV television reported. Twenty-five lawyers crammed into the small courtroom to defend her. In what some said was a move to avoid endangering Turkey's EU bid, the prosecution supported dropping the charge, saying Cig's actions had not in any way 'endangered public safety.'" I actually found an article mentioning the Assyriological community's support for Dr. Çig: "The Cig case reportedly has been criticised by Brussels [i.e., the EU]. It also drew fire from the International Association for Assyriology (IAA). 'A veteran researcher who, throughout a long career, has contributed to the recovery of the ancient past, Dr. Cig is a model representative of Turkish contribution to scholarship,' the IAA said in a statement on Tuesday, appealing for the dismissal of the charges." (Southeast European Times, a US Dept. of Defense web site).

One final note: my mention of the Armenian genocide along with "historical fact" in my October 22 post Muazzez Çığ caused some reaction... Let me put it this way: I am obviously not a scholar of the Ottoman empire, Turkish history, Armenian history or World War I. I followed in this what is the general educated consensus in Western Europe as far as I know. Granted that the picture was a lot more complicated and less black-and-white than it is often portrayed. I know, for instance, that the Turkish authorities were definitely not the only ones for whom there is evidence of less-than-exemplary behavior in this part of the world around that time. The Greeks come to mind... (please, no e-mails!). Anyway, my main point in the post in question was: "Nevertheless it does not invalidate [Çig's] cause. After all, she is not taking [Pamuk] to court or threatening him. She is entitled to her opinion just like he is." One must be able to agree to disagree.

(very preliminary and grossly incomplete list based on the articles listed on this web site; modern name followed by possible variants between square brackets and, if known, by ancient name(s) between parentheses; initial "el-" does not count for alphabeticizing; look up names with and without an initial "Tell") ($ = looted; # = damaged)