A while back, I was emailed a poem, written by Antony Di Nardo in the Winter of 2004, which I'd like to share.
•
Baghdad Museum, Clarington, Ontario 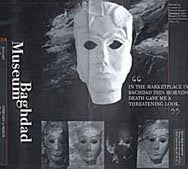 We can see the war just north of the 401,
the ziggurats of ancient sand
crumbling on these walls and around the world
outside these rooms
there’s a bowl of brass and a bowl of clay
and a bowl of souls
launching into media desperate dreams of red white
and blue soldiers wasted
in their helmets, the soft sands of time like hands lost
in the Ur-glass groping for
the artifacts of the week that’s gone, the world that fell,
the wreck of the reckoning past
with the old ways under foot, we have to face them all again
in headlines, op eds, talking heads,
and to think that on this side of the world we juxtapose
cinema Dorothy’s
ruby-painted shoes circa 1940 beatified to praise those deserted
years of Hollywood,
but not quite so in a military grab, in a colonel’s gab, so what,
so fuckin’ what
if the lapis lazuli is lost in the rubble, the Sumerians'
first record of the first
writings blown to smithereens, the armed tanks rumbling
outside spent museums
guarded by grenades, the irony of the fear of native looters
now that the past is pillaged,
the clay pots the clay heads the clay soldiers here at the end of time,
the time they slipped up,
marching on a painting of the elegant skeleton man in the valley
of the thirsty kings, the Tigris
and Euphrates, picked like a peach a plum a date palm
stuffed in an old man’s head
for desert shade, for the justification of justice done to all,
the way forward
lost and lost again in the long-time lion and the bear
resurrected out of wax,
out of a time of hunger, the lion sinking into the bleak
bear’s haunches –
these were all on the walls, in the rooms, under the roof
beneath the winter sky in Clarington
among the dreaded wombs of unwed mothers, the video
that failed to show itself
the truth, the march of crimes on blue floors cycling through
the columns of the right
and left guard watched over by the sullen eyes which a princess
slave with double-sided tape
peeled off her mouth her feet her object of desire
that they’ll never get
like the deer with antlers radiant on someone else's wall
calls affection to itself
and the buckskin warriors in camouflage and fitted boots
glued to their maps and guns
and helmets wired to the skulls behind the masks we look through
with our eyes on the first frontier
where we see a man made of steel, and outside in the snow,
in a glass case,
the man made of burs, the footprints that were made
in the snow to get us here
and back again to the 401, the angle of the sun this winter’s day
so blinding.

(very preliminary and grossly incomplete list based on the articles listed on this web site; modern name followed by possible variants between square brackets and, if known, by ancient name(s) between parentheses; initial "el-" does not count for alphabeticizing; look up names with and without an initial "Tell") ($ = looted; # = damaged)